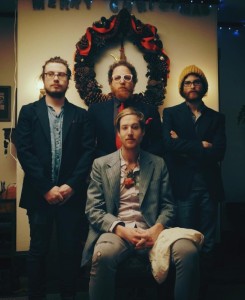 If you like pop rock, with a hint of psychodelia and fun lyrics, perhaps you should check out MA’s own The Sun Parade. This 4-piece band featuring Christopher Marlon Jennings (guitar, lead vocals), Jeffrey Lewis (lead guitar, vocals), Jared Gardner (bass), and formerly Noam Schatz (drums) brings much-needed energy and brightness to the indie music scene. These 4 men tour incessantly, and give 100% at all of their shows. From their website:

The Sun Parade works in the great American rock tradition, smuggling rogue love and existential urgency into the room on get-happy grooves. Their new EP Heart’s Out delivers on the promise of earlier songwriting with a catalog of love collisions; casual sandwich obsession; and Northern, psychedelic, basement guitar licks. Influences of Afro-pop, Elliott Smith, bluegrass brother harmonies, and four gents from Liverpool.

Based in Northampton MA since 2011, The Sun Parade has been steadily creating a buzz in New England and a grassroots following of fans across the country. In 2012 The Sun Parade released a full length LP “Yossis” and the single “Need You By My Side”, a regional hit voted the #1 song by WRSI 93.9 The River. In 2014, they released the joyful pop EP “Heart’s Out” and toured the road, including a host of shows with their pals Lake Street Dive. 2015 will find them continuing to spread the good music, touring the Northeast with their soul mates, the accessible unconscious existential indie glitter popsicle crisis band And The Kids, and hitting the recording studio to work on their next LP.

Couldn’t have said it better myself. Check their site out, as well as their Facebook.

Here’s their video for the song “Heart’s Out”